When is the Giro d’Italia?

The Cycling Grand Tour in Italy is from Saturday May 9 to Sunday May 31, 2020

Ride iconic mountains in Italy, amongst the most dramatic scenery. Challenge yourself on the famous Italy climbs and explore hidden jewels too. Our Giro cycling tours in Italy follow the final epic stages of the Tour of Italy bike race.

About our Giro Bike Tours and Cycling Holidays in Italy

Every year we organise Giro bike tours that follow the final epic stages of the Italy Grand Tour – Giro d’Italia. We witness the most incredible and dramatic stages of the Giro.

The ‘never ending’ trophy awarded to the winner is one of the most impressive trophies awarded in sport.  Our Italy bike tours not only watch the race – we see dramatic scenery and ride epic mountain climbs.

We offer cycling fans an epic cycling adventure during the Giro d’Italia and we also cater for non-cycling partners.

Enjoy the Italian food with a daily Italian coffee and Italian gelato. Refuel your rides with a spectacular Italian Pizza. We also enjoy 3+ course meals on many nights, best accompanied with Italian wine. Our Giro bike tours celebrate Italian food as much as the famous Italy bike race.

Our organised giro cycling trips are for experienced riders and social riders.

Non-cycling partners are most welcome and are well catered for throughout the trip. 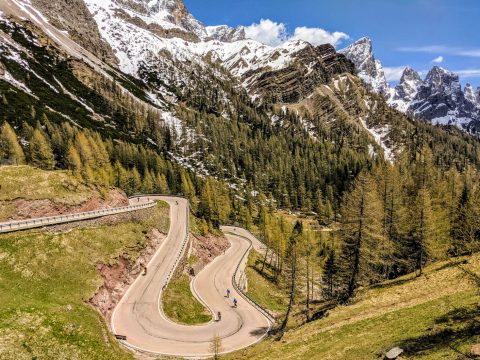 The 2020 Giro Route has been revealed and the Italy bike race holds the tradition with being a brutal and difficult Grand Tour.

The final week through the mountains in Northern Italy is monumental and will produce a lot of drama.

Riders will roll off the starters ramp on their time trial machines in Hungary on Saturday May 9, beginning with a 9km time trial.

A further 2 flat stages outside of Italy will give an early opportunity for the sprinters.

Teams then fly to Sicily after stage 3, and ride stage 4 the following day. It will be a tight schedule for team soigneurs and mechanics.

After 3 stages in Sicily, riders make their way up the boot, arriving in Rimini in the middle of the second week. The arrival in Rimini will celebrate Nove Colli, the birthplace of Gran Fondo cycling races. Starting from near Pantani's home, the race will also recognise Il Pirata on the difficult stage, stage 12.

The final stage of week 2 will finish on the Piancavallo climb, that Pantani made his own on a stage of the Giro in 1998.

Also a highlight in the second week will be the time trial around the Prosecco wine area, near Treviso. With a couple of short climbs within the profile, it could be a significant stage.

The final week has 5 stages with over 200km in length, as well as having most of the climbing still to do, it is brutal! There are 18 categorised climbs during the final week.

Twice the race will go above 2,700m, and cima Coppi – the prize for the rider to reach the highest summit of the tour, will be claimed on the Passo dello Stelvio. This may well be the Queen Stage of the race.

The penultimate stage features a brief expedition into France, in a similar stage that Coppi made his solo victory on Izoard and Sestriere. This year this stage will finish in Sestriere before the riders travel to Milan for the final stage.

The 2020 Giro Route has an Individual Time Trial at its bookends. The prologue in Budapest has a steep climb before the finish, so as early as the first stage, a selection for General Classification will be made.

The time machines will return again in the second week, on the stage that is entirely within the Prosecco growing region. Also featuring a tough climb in the profile, GC contenders will need a strong performance also.

A finale in Milan on the time trial machines could provide a final shuffle of the GC, just like Tom Dumoulin managed in 2017 when he stole a minute from Quintana and Nibali in Milan and claimed victory.

In total there is 58km of time trial across 3 stages and they will expose the important seconds that could be the difference for final victory in Milan.

Bikestyle Tours has been organising and operating Grand Tour cycling tours for 24 years, 2020 marks our 25th year of sharing the excitement to see the biggest bike races in Europe.

Our Italy bike tours travel to North Italy to ride the Dolomites and the Italian Alps. Irrespective of the season, mountain conditions can change and for some of our guests, it’s the first time they’ve seen snow. Each year, road closures in the mountains are possible and Giro stages are sometimes rerouted or cancelled because of late season snowfalls.

Snow is not unusual at the height of Summer, during August or September – fortunately it does enhance the scenery! Our local knowledge, mountain experience and thorough planning minimises any disruption to your cycling holiday. Climb the highest paved road in the Eastern Alps and ride Stelvio Pass with an experienced and responsible bike tour operator.

See an Italian Bike Race and immerse in the Italian culture

Italian fanatics are known as “tifosi”, and the atmosphere that “tifosi” create at the Giro d’Italia race is incredible to experience, your hair stands on end. As the peloton arrives, the Italian fans issue an almighty cheer, screaming “Vie–Vie–Vie” go–go–go. There is no bigger cheer than that reserved for Marco Pantani, he was possibly the greatest climber to have ever raced. The Marco “Il Pirata” Pantani supporters club still follows the race searching for an Italian rider that carries the spirit of “Il Pirata”. Today, the “shark of Messina”, Vincenzo Nibali draws the most attention of the “tifosi”. Experiencing the Giro d’Italia is so much fun, so Italian!

Stay in quality accommodation with Italian hospitality and Italian food

We choose 3-star and 4-star accommodation on our Italy bike tours and regularly return to family run hotels that have dedicated bike facilities – they have bike washdown areas, secure bike storage rooms, mechanical stands and some have an evening laundry service for cycling apparel. Rest assured, we also travel with a good supply of bike-washing equipment, mechanical spares and we have a tool-kit complete with a professional bike mechanic.

On many nights we eat at a local restaurant or from the great hotel kitchen. Italian culture is the most celebrated through its food – influenced by local ingredients and lovingly evolved from their “Nonna”, their grandmother’s recipe. A most welcoming sound over a home-cooked Italian meal “Mangiare, Mangiare”, eat-eat. Remember to restrain yourself on the first 2 courses, as often Italian meals have 4 or 5 courses. Yes, an Italian dessert is better in Italy.

What customers say about their experience with Bikestyle Tours?

Thank you for a memorable TDF. You have unbelievable patience and sense of humour. Thanks to Pat J for all your insight and advice!
"Tony S"GC Classic | TDF
To all the Bikestyle Crew, You make our travel experience, absolutely fantastic. Everything is so well organised it makes our time very relaxing, we enjoy each and everyone of you.
"Janis & Alex"Grand Tour | TDF
It has been an amazing trip! Thew whole team has made it fun, challenging and safe. The accommodation, dinners were magnificent. It is easy to see why people come back for me. I will certainly recommend it to my friends.
"Angel B"CG Classic | TDF
To all of you, thank you for an amazing experience. Thank you for helping me see my husband accomplish his dream. As a non-rider, I was so well taken care of. You have great guides and we could not have asked for more!
"Karri H"Alpe d'Huez to Paris | TDF
This was our first trip with Bikestyle, it was fabulous. All of the staff worked very hard to make the trip enjoyable, they brought the group together very well so we were able to ride together safely. The bikes where in great condition.
"Terry & Norma"Grand Depart | TDF
Dear Team Thank you for giving me the 3rd, 4th, 5th, 6th, 7th, 8th, 9th, 10th, 11th, 12th, 13th, 14th, 15t and 16th best days of my life. It has been a trip of a lifetime and all of the leaders are just perfect.
" T F "Maillot Jaune | TDF
Previous
Next

About the Giro d'Italia

The Giro d’Italia is the first Grand Tour cycling race in the World Tour racing calendar. A first opportunity for the tour riders to present themselves and state their claim for a Grand Tour victory and the privileges that come with it.

21 days of racing stages spread over 23 days. All the best riders in the world competing in one race. Unique to the Tour of Italy are the local fans, the “tifosi”.

In cycling, it simply doesn’t get any more exciting than seeing the Giro live.

For avid cycling fans, the Giro d’Italia has the most challenging climbs and astonishing scenery, it must be experienced in person at least once in their lives.